It's not too difficult to make a bland lager, comparable with the mass produced European offerings that you find in chain pubs, the essential ingredients are grain, hops, yeast and water. But it takes a lot of practice and skill as well as fine quality ingredients, to make a good tasting ale.

An underlying national passion for beer coupled with growing consumer knowledge has created a growth market for Cask Ale, or Real Ale. Inreased consumer demand naturally leads to an increase in the number of microbreweries. This is great news for the consumer as each brewery will make its own beer, resulting in a huge choice for the ale drinker. 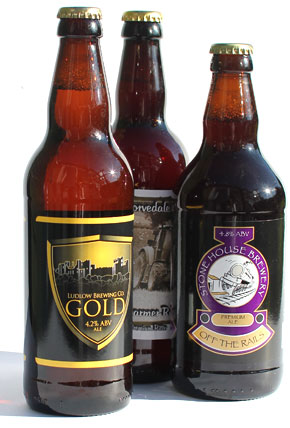 In Shropshire we are blessed with seventeen small, independent breweries, who are turning out some truly delicious ales. Be sure to look out for some of the gems described on this page when you next head out for a drink.

We have split the county into regions and listed all the breweries for each region. The north of Shropshire has two more well known breweries: Hanby Ales and the Stonehouse Brewery, and couple of smaller breweries. In Mid Shropshire we have a number of well known breweries, the largest being the Salopian brewery, whose ales are widely available in and around Shrewsbury. While located in South Shropshire are perhaps the best known breweries in the whole county: Woods, which produces, among others, the popular Shropshire Lad ale. Britain's oldest working brewery, Three Tuns in Bishops Castle, and Hobsons of Cleobury Mortimer who produce a CAMRA Supreme Champion Beer of Britain.

Location: Madeley
Contact: 01746 769606
worfieldbrewery.co.uk
Located at the brewhouse at the All Nations Inn in Madeley near Telford. Beers include Dabley Ale, Dabley Gold, Coalport Dodger Mild, The Wenlock Blonde, Shropshire Pride, plus a range of seasonal specials. They also have a range of Ironbridge Ales including Ironbridge Gorgeous, Ironmaster, Coalbrookdale and Thomas Telford.

Location: Rowton near Telford
Contact: unknown
A new brewery started brewing in late 2008. This one man brewery supplies a handful of local pubs. Beers include Bitter and Meteorite.

Location: Shrewsbury
Contact: 01743 384728
battlefieldbrewery.co.uk
Shrewsbury's newest brewery (that we know of!). At the time of writing they are planning to open a shop, and currently produce 5 beers: Gold | Amber | Mild | Citrus Blast | Sabut Jung.

Location: Oswestry
Contact: 01691 676457
stonehousebrewery.co.uk
The Stonehouse microbrewery started in 2000 from a kitchen table experiment and grew to a CAMRA award winning product. All beers are brewed by traditional hand crafted methods and include Station Bitter, Cambrian Gold, Off The Rails, Wheeltapper's Wheat Beer, Kingston Flyer KPA.

Location: Cheswardine
Contact: 01630 661234
Lion's Tail Brewery was established in 2006 and is associated with the Red Lion Hotel in Cheswardine, south east of Market Drayton. Their beers include Lion's Tail Blonde and the popular Lion Bru.

Location: Cleobury Mortimer
Contact: 01299 270837
hobsonsbrewery.co.uk
Established 1993 and winner of CAMRA's Supreme Champion Beer of Britain 2007 for its Hobsons Mild, a 3.2% dark ale using chocolate malt. Other beers include Manor Ale, Twister Spire, Town Crier, Postmans Knock and the rich and clean hoppy finish of the 5.2% Old Henry. You can buy direct from them, or find their ale in 150 local pubs.

Location: Bishops Castle
Contact: 01588 638930
bishops-castle.co.uk/SixBells/brewery.htm
Opened in 1997 on the site of the original brewery which closed in the early 1900s. Their regular beers include Big Nev's, Cloud Nine, Goldings BB and 1859 Premium. They also produce calendar Ales, one per month, 2010's offerings include August's Happy Daze, and Decemeber's Brass Monkey.

Location: Ludlow
Contact: 01584 873291
theludlowbrewingcompany.co.uk
Established in 2006 in some old maltings in Corve Street, Ludlow. Beers are award winning 4.2% Gold, dark and malty 4.7% The Boiling Well and Ludlow Best, a 3.7% pale malt. Buy direct from the brewery, or from local shops and pubs.

Location: The Sun Inn, Corfton
Contact: 01584 861239
suninncorfton.co.uk
Established 1997 and located behind the Sun Inn in Corfton. Beers include Normans Pride, Dark and Delicious, Katies Pride, Molly Morgan, Farmer Rays. They also have a couple of seasonal beer which are currently Green Hop and Winter in the Sun. St Georges Stout received a gold in the Porters, Strong Milds, Old Ales & Stouts category, and came 2nd in the overall competition held at Ludlow Castle.